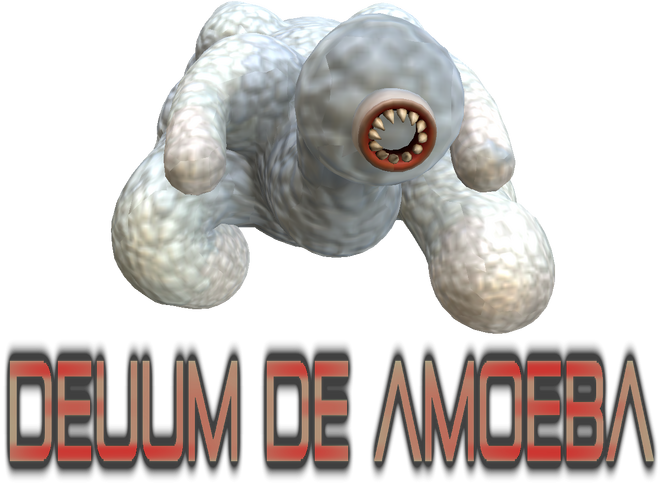 Deuum De Amoeba, also known as the False God That Will Come, is an omnipotent Hyper-Epic amoeboid entity. His main motive is to amass a horde of subservient worshippers to destroy Spode and take over the multiverse as the one true god.

Deuum De Amoeba is a planet-sized life form with massive tendrils protruding from his body. Six of these tendrils allow him to literally "walk" on the fabric of space-time without any detriment to his body.

He has a visible mouth, lined with a ring of sharp fangs. This is usually the only opening that ships are able to pass into safely. Despite his menacing maw, Deuum De Amoeba is simply a filter-feeder, though sustenance is not a concern to his life.

Deuum De Amoeba is very manipulative and straightforward. He has a soft personality when he is not provoked, and it appears that his entire body is made of a colony of various personalities that are an extension of his own. He is not completely selfish, and usually helps his followers, usually to capture and assimilate more individuals to his faith.

Deuum De Amoeba is about as large as Earth, making him a formidable foe to battle. His massive size makes him unfazed to any attack that hits his surface.

Deuum De Amoeba can project pieces of himself to watch his followers, attack enemy ships, and sterilize intruders that make it into his body. He can devour massive asteroids, and turn them into shrapnel which can be used to raid doubting planets with lethal meteor showers.

Deuum De Amoeba can spread his influence through the use of liquid spores. When an individual contracts the spores, the spores actively travel directly to the brain. The spores do not provoke an immune response, and stealthily reach the brain. Once they reach the brain, they grow rapidly and aggressively...

They inject oxycotin, dopamine, toxins, and hormones to reprogram the brain to make the individual worship and obey Deuum De Amoeba as the only god to worship. The spores erase ALL memories, except for memories that keep the victim's personality intact. They wipe all resistance and doubt, making the victim obey Deuum De Amoeba without ANY hesitation. Once the spores take root, the only way to remove the spores is lethal brain surgery.

The spore do not discriminate non-sentient life, so mammals, insects, and birds are also vulnerable to infection. The spore connect the brainwashed follower to Deuum De Amoeba's omnipresent hive mind, taking orders only directly from Deuum De Amoeba himself. The spores themselves are also highly sentient, usually making it impossible to avoid contracting them.

Yet a third strain of Deuum De Amoeba's spores allows the transformation of infected individuals into "combat" or "zombie" forms which aggressively spread the other strains of spores, but make it a lot easier for the uninfected to notice them. The third strain is only used as a last resort when there is a massive resistance preventing swift infection.

Retrieved from "https://sporerevolution.fandom.com/wiki/Deuum_De_Amoeba?oldid=6022"
Community content is available under CC-BY-SA unless otherwise noted.