Start a Wiki
Earth is the homeworld of Humanity, and the capital of the Earth Republic.

The Earth was formed around 4.6 billion years ago from debris from the Solar System's formation. A relatively short time later, a planet the size of Mars crashed into the newborn planet; the debris would later form the planet's moon.

Although Humans are the planet's most notable sapient inhabitants, they are by no means the first. Three distinct spacefaring species can trace their roots back to Earth: the Cretanians and Nolaxites.

The first sentient inhabitants of Earth (called Verrik at the time) were the reptilian Cretanians. Unfortunately, some 65 million years ago, they detected a meteor on a collision course with their planet. Unable to deflect it, they instead loaded several dinosaurs from their world and fled just before the impact. It would later enable the evolution of mammalian life from small rodents to sentient beings.

Several thousand years after the Nolaxites left the planet due to an Ice Age, the ancestors of humans originated in Africa and later were able to spread to six of the planet's seven continents. The first true civilization started c. 3000 BC in Mesopotamia.

By SY 1970 (2030 AD), Earth's landmass was divided into several competing nation-states. Two of the largest and most influential, the United States and the Russian Federation, were on the brink of nuclear war. However, an alien ship was discovered on the planet, allowing the humans to unify the planet and become an interstellar empire.

In 2012, the humans were startled by the appearance of a new species on the planet. This species, resembling the faries of Earth folklore, later disappeared without a trace after the Kleekoonanonis attacked the South American city of Rio de Janerio for no apparent reason.

In 2014, Earth was one of the first major planets to fall under the influence of Deuum De Amoeba's mind control powers. All native life on the planet was mind controlled, and the Terrans began taking an aggressive stance to further spread the control. This was undone thanks to the separate efforts of Isharos Lunar and Jercy Packson.

Earth is the third planet from Sol, a class G star. It is located in the habitable zone of its system, allowing it to have one of the most diverse ecosystems in the galaxy. It has one moon, which is usually called The Moon or Luna.

A map of Earth, or Verrik, around 65 million years ago. Click link for original image. 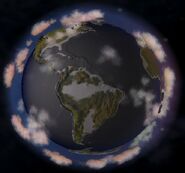 Earth as it appears in STNL. 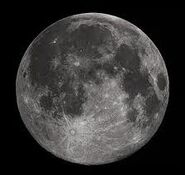 A map of Earth today.
Add a photo to this gallery
Retrieved from "https://sporerevolution.fandom.com/wiki/Earth?oldid=6626"
Community content is available under CC-BY-SA unless otherwise noted.