Start a Wiki
The Garadreads are very advanced and even had LASER guns during the Tribal Stage.

The Garadreads are the main antagonists of pretty much every interactive series. The Garadreads were created by a race called the Roslians. The Roslians were plant people that did experiments. They made the Garadreads extremely smart and strong so that they could be used as super soldiers. They sent some of their cells on a planet known as Epindol. The Garadreads rebelled and became stronger than their creators. For a significant time, they were a highly feared and respected power in the galaxy. Only one known empire is more advanced. This empire is just known as the Mysterious Aliens. Most Garadreads now live on a planet called Dreadiah.

Throughout their histroy, they have tried several times to conquer and/or destroy all life in the galaxy/universe, only to be thwarted by their enemies. One method was using the Eftievirus, a bioweapon that turns sentient and non-sentient creatures into mindless zombies. This method was thwarted with the combined efforts of the Kleekoonanonis, Thistils, and Neoruks.

In STNL: Journey's End, the Garadreads tried to destroy all of time and space with a weapon known as the Dread Star, powered by 7 planets stolen from across the galaxy. Although it seemed that it was foolproof, Jercy Packson and Plytha managed to destroy the weapon. Later, they banished over 90% of the Garadreads to a terrifying alternate dimension containing Miley Cyrus. The remaining 10% formed the benevolent New Garadread Empire led by former Titan crewmember Shadow II. However, some Garadreads who adhere to the "old ways" have been sighted in normal space, indicating at least a few were able to return. 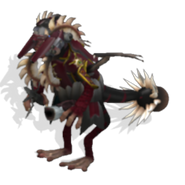 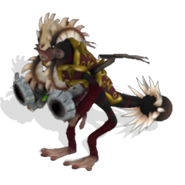 A Garadread Warp Fighter that has just vaporized a planet.
Add a photo to this gallery
Retrieved from "https://sporerevolution.fandom.com/wiki/Garadread?oldid=6464"
Community content is available under CC-BY-SA unless otherwise noted.