Holly Lydia Jenkins is a cybernetically-augmented Human female. A former mercenary, she joined the crew of the USS Titan after helping Jercy and Olara rescue Worge Gashington. She is also the mother of Iris Jenkins, born in early 2015.

Holly Jenkins was born on the Terran-controlled planet Tau Ceti III in 2061 AD (1985 CE). Growing up, she learned several forms of martial arts, most of them of human origin. It was around this point she heard the call of war, and decided to become a soldier.

After finishing high school, Holly went to the West Point Academy on Earth. However, she would later find working with other soldiers a bit too demanding, so she decided to become a mercenary instead, helping other species in warfare for a price; and she acquired her own ship, the Avenger.

Around 2013, she stepped on a shrapnel mine on planet Tamaran, losing her arm and eye in the resulting explosion. She was immediately taken to a nearby medical center, and had a large weapon attached in place of her arm and an implant in her eye. She also had a life-support system installed in her body.

In 2014, Holly crashed on Khothenniuweemycreezip, the Rando'Moss'Iti homeworld. Around the same time, Jercy Packson and Olara C'Swal, captains of the USS Titan and TS Lahlia, respectively, arrived on the planet to discuss their mission to save Worge Gashington, leader of the Kleekoonanonis, from the stupid and evil Pernajahs. She overheard their conversation, and offered her services in exchange for getting her ship fixed. Jercy accepted, and even decided to let her join the crew. She later took Daiddet Angehaw's position following his death by Giant Alien Spiders.

While onbord, she fell in love with fellow crewmate Xhoth Denes, unwittningly conceiving a child. They kept their relationship secret, and Jercy never found out.

In early 2015, after the crew fought off the Sagiyandes, Holly temporarily left the crew to get some assistance for an upcoming retaliatory strike on the planet Oraydee. After directing her friends to the planet, she left to find Xhoth and told him of her pregnancy when she caught up with him as the "Dreaded Games" ended.

While helping Xhoth take the survivors to their homes, the BA Twinkie ran low on fuel and stopped at the Roizelle colony on planet Yurgon-7 for fuel. She was shopping for baby stuff when Tesiot Industries ambushed. When she was done, she found the city deserted and found survivors who'd been with Xhoth; helping them in a retaliatory strike.

When Xhoth decided to wipe Tesiot Industries off the face of the galaxy, she returned to her home on Tau Ceti III and (after eating a Pregnut) gave birth to her child, which she later named Iris Jenkins (as Holly and Xhoth had both lost one of their eyes, and she didn't want her kid to suffer the same fate). She wanted to resume her relationship, causing Xhoth to awkwardly leave. Shortly thereafter, Jercy arrived and picked her up and she rejoined the Titan's crew.

After the SPORE Server Maintenace, Holly spent the shore leave on Asir relaxed until coaxed into joining Herbert on a rescue mission to save General Crabs of the Rando'Moss'Itis.

Holly has short auburn hair, which she usually combs over her unaugmented eye to improve the sight in the other one. Her most recognizable feature is her large cybernetic arm, which can either fire a plasma shot or missles at targets, as well as electrocute them. Her natural arm has a small blade that can also be used against targets. She typically wears battle armor directly over her scarred body. In lieu of a skirt or pants, she wears special leggings which can project a forcefield around her.

Although usually friendly and willing to help, Holly does have a particularly nasty temper; causing her to lash out randomly at people even if they're just compilmenting her (as Autune Mosstyx once found out). 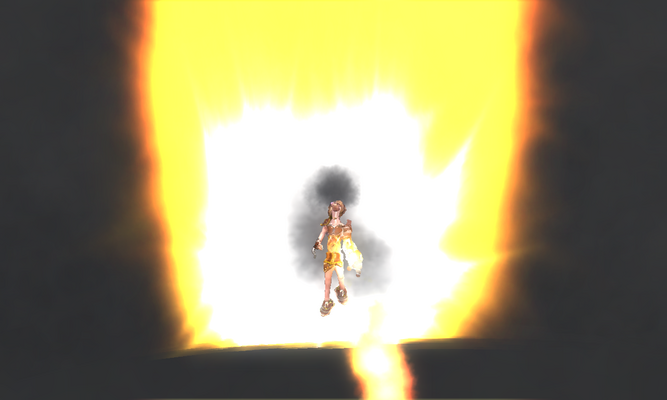 THIS is how badass Holly is. 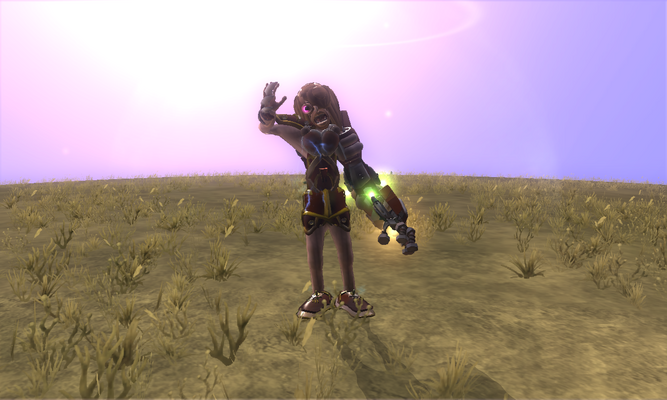 Having rejoined the crew, Holly waves to the camera on Tamaran. Also shown is her awesome new outfit.
Add a photo to this gallery
Retrieved from "https://sporerevolution.fandom.com/wiki/Holly_Jenkins?oldid=6621"
Community content is available under CC-BY-SA unless otherwise noted.