Start a Wiki
Mars is an important Human colony in the Sol system.

For more on Mars in real life, click here.

In the SR Universe, Mars was colonized by Humans sometime after the 1970s, and is currently being terraformed. This terraforming has reached a point where carbon-based species can survive on the planet without life-support systems.

In 2013, a research base on Mars was destroyed by the T'Rons. Even though nobody was hurt, the attack nearly caused an interstellar war between humans and Toriins, which was narrowly stopped by the Kleekoonanonis.

Later that same year, the Ashokweers colonized the planet after the destruction of Uhleneria, their homeworld. This breached the Europa Conventions, which stated that no race that wasn't allied with Humanity could colonize the planet. If the Kleekoonanonis hadn't helped them move to another planet, it would've started a war.

Mars is the fourth planet in the Sol system. At one point, it was suitable for life, but changed to a cold desert over billions of years due to the loss of its magnetic field. Today, terraforming has managed to make it a bit more habitable.

It has two small moons, Phobos and Deimos. Most scientists believe they were originally from the nearby Asteroid Belt, and got captured by Mars' gravity.

A map of Mars from the real world. 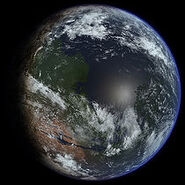 A Terran colony on Mars.
Add a photo to this gallery
Retrieved from "https://sporerevolution.fandom.com/wiki/Mars?oldid=6180"
Community content is available under CC-BY-SA unless otherwise noted.