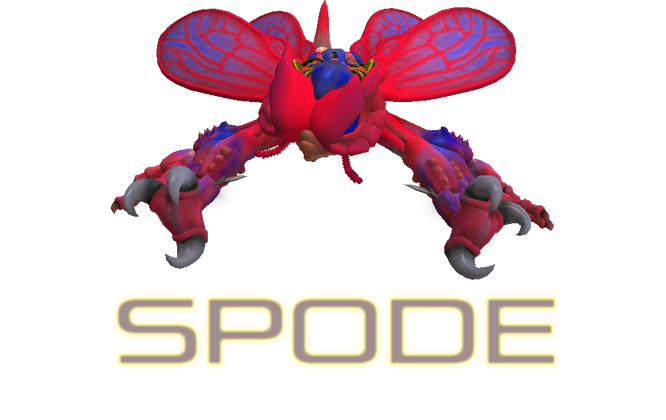 Spode is a Mysterious Alien. He is a benevolent entity, who can help the forces of good. When faced with forces of evil, he will occasionally plague them with his merciless rage. Natas always has to stop him from destroying all evil, so there is balance. Spode is basically the "leader of the good Mysterious Aliens" who help the good. Natas is more neutral compared to Spode, although he helps evil a tiny bit more than good.

Spode's physical form is a dragonfly-like Epic Creature. Although he hovers above the ground, he doesn't flap his wings unless he "jumps". His feet are always airborne as a result, and can function like hands. His front "graspers" are actually powerful talons, mainly used for grabbing. His other four "graspers" are more insectoid feet. He rarely lands on the ground. Mysterious Aliens can shapeshift and this is the form Spode chose.

Spode is a benevolent Mysterious Alien. He is usually very calm, but is easily provoked, especially if something very evil is going on...

Being a Mysterious Alien, Spode has a variety of abilities in his arsenal. He is capable of teleportation and matter manipulation. He can create a black hole from his talons, and bash the short-lived singularity at foes. He can also fire a compressed star that goes supernova when it impacts a target, inflicting terrible casualties to malevolent forces.

Spode is pretty much immortal, meaning he cannot be killed. If he does fall in battle, he will regress to a non-corporeal form and recover his strength and regain his physical form.

Retrieved from "https://sporerevolution.fandom.com/wiki/Spode?oldid=6054"
Community content is available under CC-BY-SA unless otherwise noted.